Tuesday, March 3, 2015 7:00 PM Kankakee Valley High School AWAY 41 New Prairie High School HOME 57 Game Recap The Kougars’ season came to a close tonight at the Calumet sectional with KV losing to New Prairie by 16. KV started the game well getting out to a 4-0 lead but poor shooting plagued 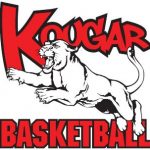 The Boys sectional game at Calumet is still on for tonight!  KV will play New Prairie at 7:00.

Friday, February 27, 2015 7:00 PM North Judson-San Pierre High School AWAY 29 Kankakee Valley High School HOME 70 Game Recap The Kougars earned a big win tonight against North Judson to close out the regular season. Nearly everyone who played contributed to the win. KV set the tone early in both halves allowing only 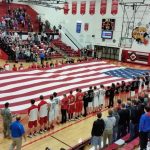 This past Friday at the boys basketball game against Hebron, Kankakee Valley promoted the IHSAA Champions Together program.  We also had an Indiana Army National Guard night sponsored by SSG Robert Anderson who is the recruiter for our school district.  The night was full of excitement and a lot of good things happened.  After a

Thursday, February 12, 2015 7:00 PM Hebron High School AWAY 60 Kankakee Valley High School HOME 62 Game Recap The Kougars earned a much needed and tough fought victory tonight over the Hebron Hawks. KV fought their way back to force the game into overtime. In the extra session KV was 8-12 from the free

There will not be a boys game on Feb. 20th.  Both Boys JV & Varsity Basketball teams picked up a win over Griffith due to sanctions handed down from the IHSAA against Griffith.  According to news released by the IHSAA, Griffith High School will have to forfeit their remaining games and will not be allowed

Friday February 6th, 2015 07:00 PM Kougars Away 55 @ Hobart High School Home 60 Game Recap Kankakee Valley suffered a tough conference loss on the road at Hobart. KV played hard from beginning to end. The Kougars were down 8 with 4 minutes to play and fought back to tie the game and send