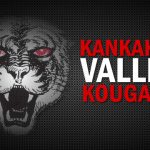 The Female Athlete of the Week is freshman pitcher Emma Maple from the Lady Kougars softball team.  In games against two tough opponents in Lowell and Hanover Central last week, Emma went 3 for 8, including a double, a triple and a game winning two-run home run with two outs in the ninth inning against

Last night KV defeated Andrean 112-18 and lost to an outstanding Munster team 89-43, in their first NCC double-dual of the season, moving to 6-2 on the season, both losses to Munster.  The area 7th ranked squad was again led by 4x All-Stater, Jenna Jungels.  “Jr.” not only won 4 events overall, but she broke

The Kougars dropped the second game with Lowell by the score of 15-8.  Mac Shane Howard started the game for the Kougars and Steve Ganzeveld entered to finish the last 4 and 2/3s innings.  Steve pitched very well tonight giving up 4 earned runs.  The Kougars were led in hitting by Wes Lewis was 3

The kougars held off the visiting Lowell Red Devils to take the first of a 2 game set with the conference opponent. The kougars came to play and drove the baseball all over the field and scored 4 runs in each the first three innings. Runs came at a premium after that as the devils

On the first day of conference play the Kougars hosted the Griffith Panthers. The panthers opened up the scoring in the top of the third by scoring 1 run on an error. In the bottom of the third the kougars answered back by plating 4 runs of their own. The panthers scored one more time

On a very windy opening day the kougars scratched out a win against the visiting bombers. The kougars opened up the game by scoring 9 runs in the second inning. The bombers came back in the top of the third with 9 of their own. With defense being shaky for the first game of the