All wrestling season long the KV wrestling team has been working hard trying to make their place in the IHSAA State Tournament.  We had 8 regional qualifiers, 3 semi-state qualifiers and 1 State Qualifier!  Congratulations to all our wrestlers and especially to Cole Solomey for his 7th place finish at State!  The wrestling state finals are impressive to watch!  Several local KV supporters made the trip to Indy and supported Cole!  It was great to see the support, and Cole along with our coaches did a great job of representing our school at this event.  After making it out of the Friday night round Cole started off his day on Saturday by wrestling the #1 seed and eventual state champion Zeke Seltzer.  Cole wrestled him as good as anyone else did and lost 8-3.  In the second round on Saturday Cole lost 4-2 in a heart breaking match to a kid from Evansville Mater Dei.  Cole secured the 7th place finish with a 16-0 win over his last opponent. 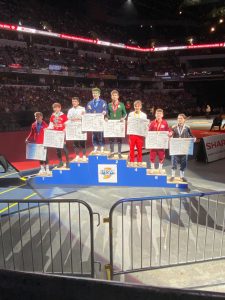 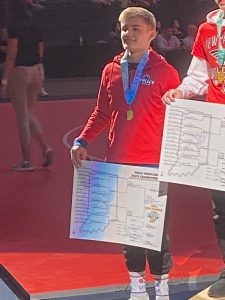