Kankakee Valley softball player Maddie Swart has a new title: MVP! Saturday June 22nd Swart played for the North squad in the ICGSA North South All Star Game!  Due to weather issues the team only played one game that day instead of the scheduled two games.  That must of been enough time to leave no doubt that Maddie Swart not only belonged there but came out as the MVP for the North team.   Swart finished 1-for-2 with a run and two RBIs to help the North All-Stars win in Bloomington.  Congratulations to Maddie and her family!  Good Luck at Purdue Fort-Wayne! 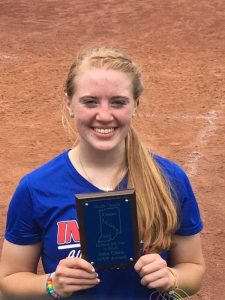