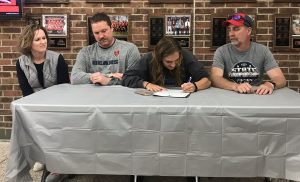 This past week was another exciting week for Cat Cavinder!  The 3 sport senior athlete has officially signed to run Track and Field for the Air Force Academy.  The Air Force Academy is a NCAA division I school.  Cavinder had several schools she was trying to decide on and decided to run for the Falcons!  Cat is the daughter of Rachel and Clinton Cavider of Wheatfield.  Cat has earned varsity letters for Kankakee Valley in Cross Country, Volleyball, Basketball, Track and Softball.  She doubled last spring and ran track and played softball in the same season.

Cat earned the right to compete at the state level in Cross Country as a sophomore and in Track as a freshman and then returned as a junior.  She improved from 20th place as a freshman in the 800 meter run to 7th place as a junior.  Cat was also a part of back to back IHSAA sectional basketball championships.  She was also a member of 2 track sectional championships.  Cavinder has earned countless accolades and I am sure before the year is over there will be several more.

Celebrating at the signing with Cat were her friends, coaches and family. 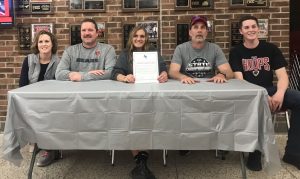 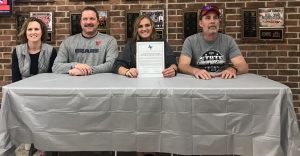