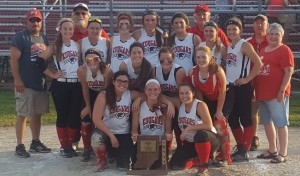 In the championship game of the Kankakee Valley softball sectional, the host Kougars drew first blood in the first inning when first-baseman Ashley Fisher ripped the first pitch she saw for a triple, scoring Sarah Starr who had come on as a courtesy runner for pitcher Emma Maple.
Andrean answered in the second. A lead-off walk to Ashley Salinas followed by back to back sacrifice bunts moved Salinas to third with 2 outs. A double from shortstop Jess Adamczyk brought home Salinas to knot the game at 1.
With one out in the third, KV’s Emma Maple sent a major league fly ball to left which was dropped. Fleet-footed Sarah Starr came off the bench once more to run for Maple. With 2 outs, Emma Sark drilled a double to the right field fence. Starr scored to give the Kougars a 2-1 lead.
KV added another run in the fifth when centerfielder Mckenzie Adams led off with a double. Kougar catcher Maddie Swart then sacrificed her to third. Then Emma Maple’s sacrifice fly to right brought home Adams to put KV up 3 to 1.
Andrean rallied big-time in the 7th. A lead-off double by Kennedy Kuykendall got things going. She scored on a single from Jess Adamczyk to close the gap to 3-2. Maple then struck out the next ‘niner hitter. Andrean pitcher Abby Graegin then drew a walk to put runners at first and second with only one out.
Maple then struck out an Andrean pinch hitter to record the second out.
The count on the next batter went full and with everything on the line, Maple blazed a fastball past the ‘niner hitter and into Swart’s mitt for her third strike-out of the inning to give Kankakee Valley its first sectional title since 2006.
The 26-5 Kougars will travel to Griffith on Tuesday to take on the Panthers in a 1-game regional championship.
Pitching: WP–KV–Emma Maple–(20-4)–7 Inn, 5 H, 2 R, 5 K, 3 BB
LP–And.–Abby Graegin–6 inn, 6 H, 3 R, 2 K, 1 BB
Hitting: KV–Mckenzie Adams-double, run
Emma Sark–double, RBI
Andrean–Jess Adamczyk–2 for 3, double, 2 RBI

LaPorte (Scrimmage)
10:00 am
View All Events